Before you brush today, consider this: Poop is just the beginning of what could possibly be hanging out on your toothbrush.

Guess what? If your bathroom has the sink and toilet in one room, and you flush with the lid open, there is fecal matter on everything within a 5 to 6 foot radius. Flushing aerosolizes your poop, depositing bacteria like Escherichia coli, or E. coli, directly onto your toothbrush—and brushing with an E. coli-loaded instrument could make you sick. “This bacteria is associated with gastrointestinal disease,” says Dr. Maria Geisinger, DDS, an assistant professor and periodontist at the University of Alabama at Birmingham.

Gastroenteritis, or infectious diarrhea, is one such illness. “In bathrooms with a toilet attached, [researchers] looked at toothbrushes in normal use between one and three months,” Geisinger says. “At the three-month mark, they found E. coli colonies. That’s a good reminder to replace your toothbrush every three months.”

Once E. coli and the other bacteria on this list form colonies, they’re a lot harder to kill because “they start to make an extracellular matrix, which protects them from antimicrobial medicines that you might use in the toothpaste, mouthwash, and even antibiotics,” Geisinger says. “One of the reasons you can’t just take an antibiotic and say ‘oh good, my dental disease is cured’ is because they’re actually in a biofilm.”

The colonies on your toothbrush are similar to the algae that grows at the bottom of the pool, according to Geisinger. “Your pool is full of water—you can’t just swish it around and get that algae off,” Geisinger says. “It’s got to be scrubbed off because it’s protected by this extracellular matrix. In fact, complex biofilms have a circulatory system. So they’re almost like a living organism, composed of all this different bacteria.”

So make sure to flush with the lid down, which will greatly decrease aerosolization, and, therefore, the literal crap on your toothbrush. Also, be sure to wash your hands after you use the restroom and before you brush to avoid transferring fecal matter to your toothbrush that way, Geisinger says, and change your toothbrush every three months.

This bacteria typically lives in your respiratory tract and on your skin, and, under the right conditions, can be responsible for some pretty nasty stuff. “It’s often associated with [antibiotic resistant] MRSA infections or necrotizing fasciitis, which is flesh-eating bacteria,” Geisinger says. 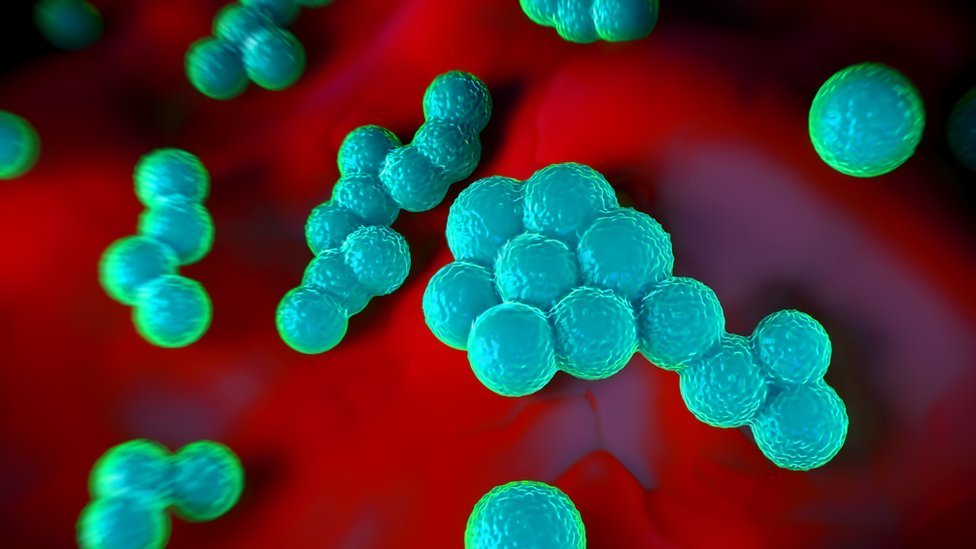 Necrotizing fasciitis occurs when bacteria enters the skin through an open wound, and, according to the CDC, most often affects people who have other health problems that might hinder their bodies’ efforts to fight infection. Thankfully, this condition very rare, but you still don’t want the stuff that could cause it on your toothbrush.

It makes sense that this bacteria would be on your toothbrush—it’s responsible for tooth decay. “But again, we’d like it not to be there,” Geisinger says. “You don’t want to take tooth decaying material from one area of your mouth and put it in another while you’re trying to do your due-diligence about removing deposits.” Keeping bacteria and other nasty stuff to a minimum on your toothbrush could be as simple as what you buy. According to one study, “Toothbrushes with lighter or clear bristles retain up to 50 percent less bacteria than colored toothbrush bristles,” Geisinger says, potentially because clear toothbrush bristles have less porosity than colored ones. And instead of brushes with fancy perforated or rubber handles, opt for solid plastic handles which studies have shown “had less microbio load than larger or perforated or multi-surface handles [because there are] fewer nooks and crannies for the bacteria to hide in,” Geisinger says.

That thing you had for dinner last night? Yeah, it’s probably still on your toothbrush the next morning … and now it’s food for the bacteria on there, too! (As are your poop particles. Yuck.) Avoid having unintentional leftovers and clear out bacteria by washing your brush before it goes in your mouth in potable tap water or antibacterial mouth rinse, Geisinger says.

5. AND 6. LACTOBACILLUS and PSEUDOMONAS

“These are two bacteria that have been associated with pneumonia type infections, particularly in hospital settings” where a patient is on a ventilator, Geisinger says. Though Lactobacillus is typically considered a “friendly” bacteria—it’s sometimes used to treat diarrhea and is present in foods and our own guts—it can also be linked to cavities and tooth decay. Pseudomonas can cause eye infections if you use contacts and don’t clean them adequately.

Bacteria thrives on brushes that have frayed bristles, by the way, so Geisginer (and the American Dental Association) recommend replacing your toothbrush if the bristles are looking like they’ve seen better days—even if you haven’t hit the three-month mark yet.

And now, a virus! “Herpes simplex type one used to be called oral herpes, but now almost 50 percent of genital lesions are also herpes simplex type one,” Geisinger says. “The viruses are different than bacteria because they come in little capsules, and they’re not technically alive—they need your cells to replicate. In a patient who has an active herpes outbreak, an oral cold sore, that virus can be retained on the toothbrush up to a week.”

Geisinger says she’s not aware of any research into “the viability of the viruses on the toothbrushes,” but says that transfer of a virus from one person to another by sharing toothbrushes is a possibility under the right circumstances. “HSV can be transmitted in saliva, so sharing toothbrushes during an oral herpes outbreak could lead to a higher risk transfer of viral particles and therefore disease,” she says.

Another virus that can make a home on your toothbrush is Human papillomavirus, or HPV. “It’s linked to both cervical cancer and esophageal and oral cancers,” Geisinger says. “The interesting thing about HPV is that the presence of HPV in your mouth seems to decrease if you do a good job with toothbrushing.” And once again, if you share toothbrushes with someone who has HPV, you could be at risk for contracting it yourself. “Both viruses are transmissible in saliva,” Geisinger says, “so viral transmission through shared toothbrushes is a possibility.”

This fungus is responsible for yeast infections and diaper rash. The most common species in the mouth is called Candida albicans, which causes oral thrush—basically, a yeast infection in your mouth. “[C. albincans] is linked to higher decay rates in kids,” Geisinger says. “In kids that have candida infections, about 15 percent have candida reservoirs on their toothbrush, and it can certainly be passed among siblings or other toothbrushes stored in the same area.” To keep candida from infecting multiple toothbrushes, make sure that the instruments are stored upright and away from each other.

According to Geisinger, one of the worst things you have on your toothbrush is moisture because it encourages bacteria to grow. “There’s a precipitous drop in bacteria [on toothbrushes] after about 24 hours, and that’s really because the toothbrush dries out,” she says. “So, if you can, having two toothbrushes is probably advantageous.” If you’re using a toothbrush just once every 24 hours, it will stay nice and dry, and bacterial loads will be low.

Another thing you shouldn’t do: Cover your toothbrush. “Even though it’s tempting because of the fecal matter from the toilet, covering toothbrushes or putting them in your medicine cabinet does not allow them to dry out,” Geisinger says. “Bacterial counts on those toothbrushes are considerably higher than on toothbrushes that are stored upright, separate, and allowed to dry completely.”

Up to 70 percent of adults in the United States have gingivitis, and about 47 percent of people over the age of 30 have destructive gum disease. “That means they have ulcerations or microscopic breaks in the tissue underneath the gum lines where they can’t see, which allows blood to get on the toothbrush,” Geisinger says. “It also allows a pathway for bacteria to get into the bloodstream. In patients with inflammation, bacteria in your bloodstream spike after things that would irritate those inflammations—including mastication, eating, toothbrushing, even a visit to your dentist to have a cleaning.” That’s how dental and oral bacteria end up in plaques that are associated with heart disease.

“The amount of bacteria in the bloodstream is actually proportional to how much inflammation and dental disease is present in the mouth,” Geisinger says. “Patients who are receiving regular dental care—that includes dental cleaning and exams—have improved levels of gingival inflammation, less blood in their saliva, and less blood on their toothbrush. So go see your dentist!”

Did you like this article? Share with your friends on the social networks! Help us to reach as many people as possible with information! Knowledge is never so much and with information people can improve the world!

Want to receive more news like this? Register this site and receive news!

Have doubts, criticisms, suggestions? Share your experiences with me and help improve this Website! Leave a reply!

More from my site

Answer these 36 questions and it *could* lead to love, says study

You may have missed

Answer these 36 questions and it *could* lead to love, says study

Apollo astronauts left their poop on the moon. We gotta go back for that shit